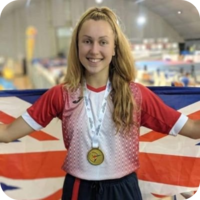 Leyla is a 3rd dan black belt in Taekwondo and part of the GB Taekwondo team. Leyla recently defeated Katarzyna Bartnikowska from Australia at the 2022 Swedish Open.

Leyla is sponsored by

and has received support from SportsAid, Sport England, and the GLL Sport Foundation.

This website is created and maintained by the Inspirational People non-profit organisation. The above image is © Leyla Palser, used here with permission.

In January 2022, Leyla announced she had been selected to join the World Class Olympic Taekwondo programme as a full time athlete.

Issy Films created this YouTube video which summarises Leyla's journey in Taekwondo up until 2017.

Leyla takes Gold for Poomse in 2015

This is Leyla at 10 years old working through the elimination process at the UK Southern Area Open in 2015.